The jawbone arch at the start of the pathway across the Meadows is formed by four whale jawbones placed vertically on a rough square and meeting at the top. The bones were exhibited at the International Exhibition of Industry Science and Art Exhibition of 1886 where the Shetland and Fair Isle Knitters' Stall was constructed of jaw bones. They were erected at the entrance to the east and west Meadows from the Middle Walk in 1887, after the Town Council of Edinburgh received a letter from Sheriff Thoms recommending the acceptance of the jawbones.(source:www.rcahms.gov.uk) 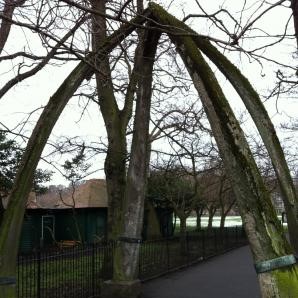 Two commemorative pillars at the West End of Melville Drive, erected in 1886 in connection with the International Exhibition opened in 6th May of that year by Prince Albert Victor. The shafts of the Pillars are built up with cube stones cut with the names from the various quarries which have supplied Edinburgh and District, and the Pillars now illustrate the weathering qualities of the stones. (source:www.rcahms.gov.uk) 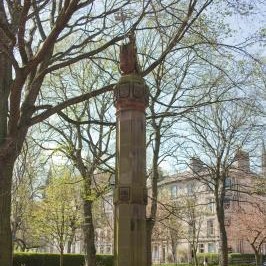 A pair of eight sided gatepiers each topped by a unicorn are found at the entrance to the Meadows on Middle Meadow Walk. On the right unicorn's ribbon it reads "Nisi Dominus Fru[stra]" or 'Except the Lord in Vain', which has been the motto associated with Edinburgh since 1647. On the left unicorn's ribbon it reads, "[Nemo] Me Impune La[Cessit]" or 'No one provoked me with impunity', which is the motto of the Order of the Thistle. (source:www.rcahms.gov.uk) 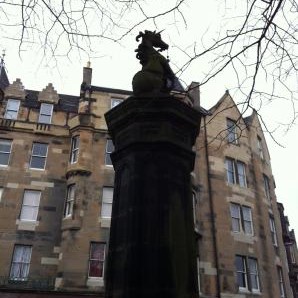 The pillar at the East of The Meadows was erected in 1881 By T. Nelson and Sons in 'commemoration of the kindness and sympathy shown to them by the magistrates at the time of the great fire in 1878.' There is a lion rampant on the top holding the city shield. (source: www.rcahms.gov.uk) 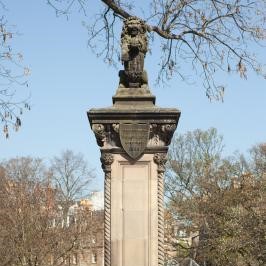 This marble memorial fountain is inscribed "Helen Acquroff Sister Cathedral 1889". On a raised band around the centre of the column it says, "Erected by members of the I.O.C.T and other friends." (source: www.rcahms.gov.uk). The IOCT were the Independent Order of Good Templars. Helen Aquorff was a blind musician and popularly known as 'Sister Cathedral'. 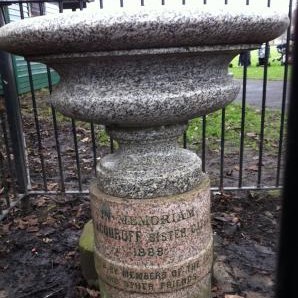 The sundial was erected in commemoration of the opening of the International Exhibition by Prince Albert victor of Wales on 8th May 1886. Shields on the sundial are carved with a crown, the arms of Edinburgh, a lion rampant and a castle. One inscription on the sundial reads, " Tak tent o' time ere time be tint" or 'Take account of time before your time is finished.' Quarry names are also on the blocks making up the shaft of the sundial. (source: www.rcahms.gov.uk) 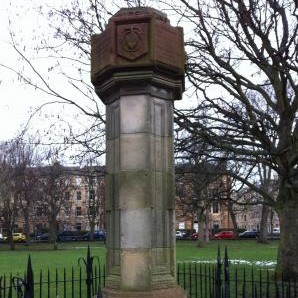