Fountain erected by loyal supporters of a doctor who was the subject of a controversial medical case involving the death in childbirth of Jane Anderson. It bears the inscription: "This fountain has been erected in remembrance of Dr Hugh Dewar, Portobello, by his grateful patients and numerous friends, who deplore the loss in the prime of manhood of a kind friend and skilful and beloved physician. His quiet charity was known to the needy. 1866-1914" 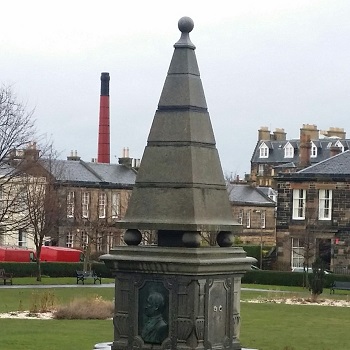 A pair of carved stone decorative gatepiers formally from Comiston House on Camus Avenue which was built for the Lord Provost James Forrest in 1815. Moved in the 1930's they now hold a prominent position marking entrance to the Braid Valley public park. 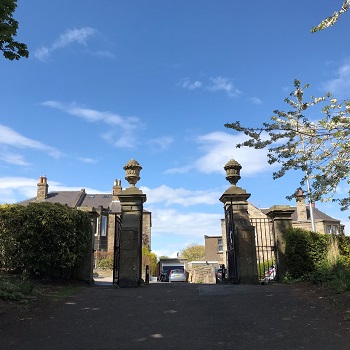 The monument consists of 32 stone rocks set in a ring, one from each of the 32 council areas that constitute Scotland and represents the re-birth of the Scottish Parliament. The site is meant as a northern equivalent of Speaker's Corner and takes its inspiration from the poem 'Scotland' by Hugh MacDiarmid, which refers to "a statue carved out in a whole country's marble". 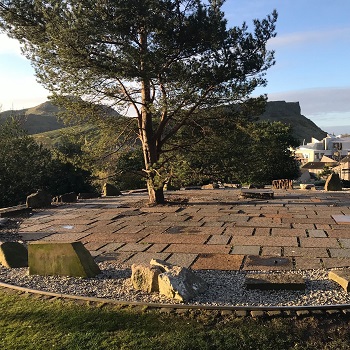 This 18th Century sundial is of square stone design with four vertical dials on a short pillar, stepped up stone base, with stone thistle ornamentation on top. (source:www.rcahms.gov.uk) 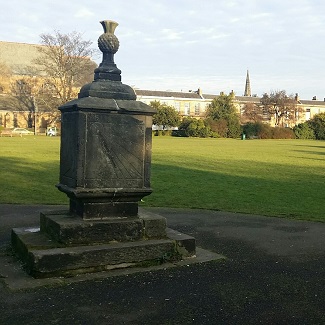 A commemorative monument with a plaque that reads;" To commemorate the life of Willie Shanks B.E.M 1905-1995 who did so much, in so many ways for the people and children of his adopted village of Balerno." 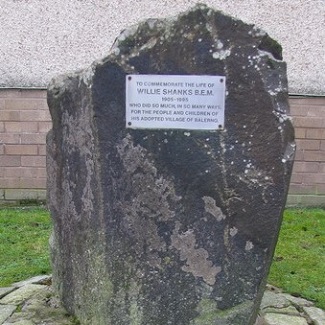 The bronze statue (and three accompanying stones and plaques) were formally unveiled in September 2019.  It was commissioned by the Leith Rules Golf Society and is the work of Scottish sculptor David Annand.  John Rattray was the Captain of the club at Leith Links in 1744, he won the first "Open" golf competition there and was signatory to the first rules of golf.  The statue commemorates the 275th anniversary of the first signing of these rules.  It depicts John Rattray about to tee off in the first ever golf competition which he won in 1744. 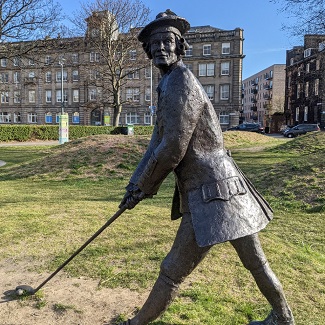 it appears no-one knows the true origins of Leith Links' famous twin braes but the two conspicuous grassy hillocks that serve as a reminder of a far from peaceful episode in the old port's history.  Dubbed Giant's Brae and Lady Fyfe's Brae, tradition has it the twin mounds - which are listed as scheduled monuments of national importance by Historic Environment Scotland - are remains of English gun emplacements deployed in the Siege of Leith - a claim that is hotly disputed.  Concluding in the spring of 1560, the siege ended a twelve-year encampment of more than 2,000 French troops in the town.  While hundreds of lives were lost on either side during the conflict, the continental visitors eventually agreed to leave peacefully after agreeing to the terms laid out in the Treaty of Edinburgh, this the treaty effectively replaced the Auld Alliance between France and Scotland with a new Anglo-Scottish accord.  These mounds are a mystery but they are archaeological monuments in their own right, they played a part in the siege works but what that role has disappeared in the mists of time. 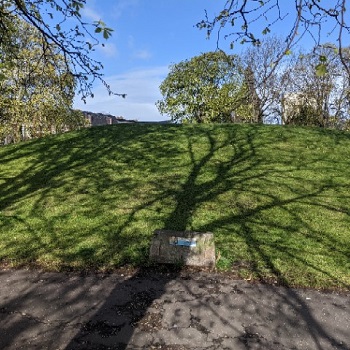 This 16th century Doocot was built to supply pigeons to Lochend Castle. In 1564 it was used as a "plague kiln" to burn clothes and bedding of infected people during an outbreak of plague.  Later in the 19th century it served as a boat house for the Royal Humane Society who were set up to save people from drowning. The boat was also used in winter to check if the ice on the loch was thick enough for games of curling. 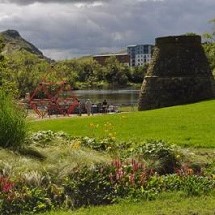 Cairn and Stone Circle in Newbridge

This bronze age burial cairn is encircled by three standing stones. It is unknown if the stones formed part of a stone circle.

The war memorial in Redhall Park bears the names of the fallen soldiers of the First and Second World Wars. It is inscribed, "Erected in memory of the men of Slateford and Longstone who fell in the Great War 1914-1918 (names). Supplementary to the Colinton Memorial 1939-1945 (names)." 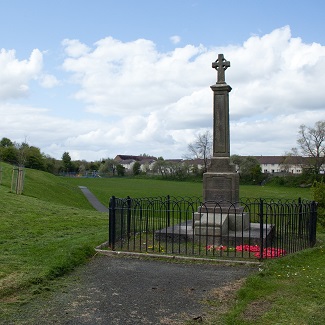 The sundial dates from the 17th century, and was restored in 1899. There are inscriptions around the four sides of the base. Around the second step from the ground, it is inscribed "Bless ye the Lord and praise him and magnify him forever o ye light and darkness". (source: www.rcahms.gov.uk)

Dreamer of Peace in Saughton Park

The statue was designed by Kaivalya Tropy, inspired by Sri Chinmoy (1931-2007) who was an Indian spiritual leader. Embodying a vision of peace that is both contemplative and dynamic the Statue offers you the chance to hold the torch and offer your own hope for peace - a prayer, a good thought, a moment of silence. 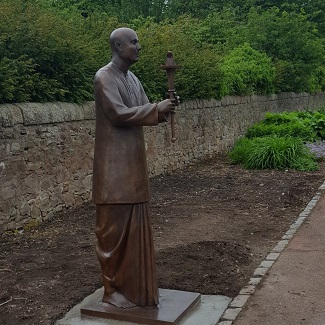 The bust, sculpted by Kirti Mandir, commemorates the 151st Gandhi Jayanti and was unveiled by His Excellency Inder Kumar Gujral Prime Minister of India in the presence of The Right Honourable Eric Milligan Lord Provost of Edinburgh on 25 October 1997

The statue was presented to the City of Edinburgh by Professor and Mrs N Rangabashyam.  The Goddess Sakthi or Ammam is regarded as the universal mother, and who in Hindu mythology is Parvathi, wife of Lord Shiva. It was unveiled during the Commonwealth Heads of Government Meeting (CHOGM) in Edinburgh 1997 by Inder Kumar Gujral Prime Minister of India.  It is one of the only monuments which represent a woman in Edinburgh, the other being Queen Victoria in Leith. 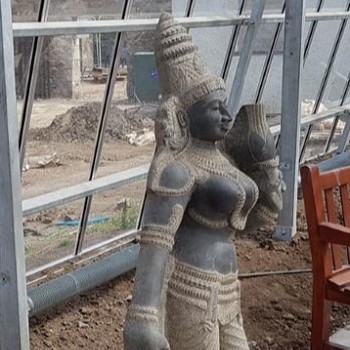 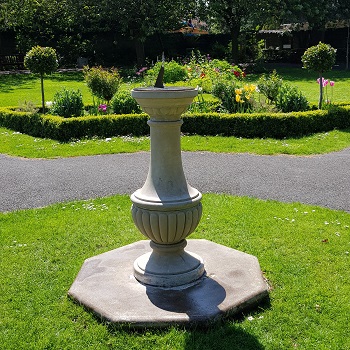 This bronze statue of Kind Edward VII was unveiled 4 July 1914 by Lord Glenconner. There is a panel inscribed with 'Peace' as Edward VII was known as Edward the Peacemaker. The statue was completed by the sculptor John S.Rhind.(source:www.rcahms.gov.uk) 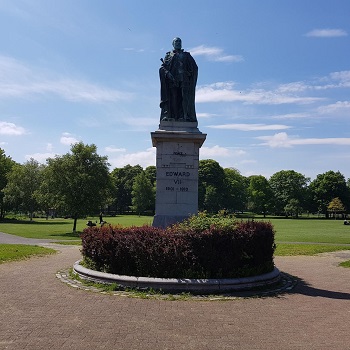 This drinking fountain was presented to the Burgh of Leith in 1899 by the Leith Horticultural, Industrial and Sports Society. (source:www.rcahms.gov.uk).

The top of the sundial is inscribed with the date 1684. The pillar is late 19th century. (source: www.rcahms.gov.uk) 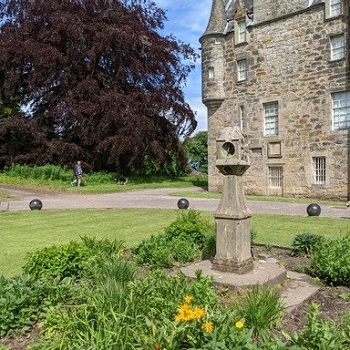 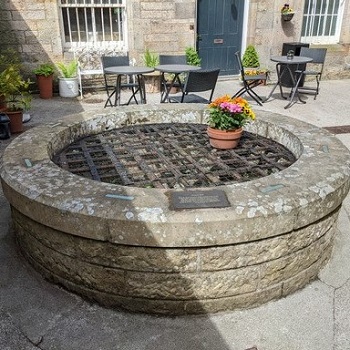 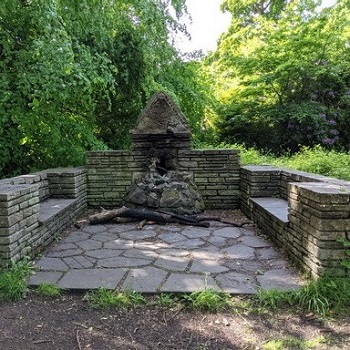 The pillars are understood to have come from the porch of the headquarters of the Free Church of Scotland in George Street. They were erected at Lauriston by Andrew Rutherfurd who owned Lauriston castle between 1842 and 1854. He employed William Henry Playfair to remodel the gardens at Lauriston. Rutherfurd was a prominent Free Church supporter. 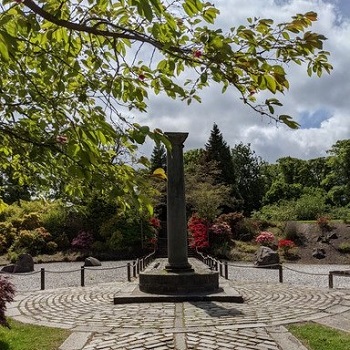